The great hall, the Lairds bedchamber and private study make up the grand apartments.  Sir Andrew Kerr, The Laird at Ferniehirst during the 17th century was a King’s courtier.  The family held important positions at the court of James VI in Scotland and later when he ascended the English throne as James I the Kerrs were amongst the first Scottish nobles to accompany the King when he removed his court from Holyrood to the royal palaces of England.  The King himself had his Grand Apartments and it was customary for nobles to imitate the fashions of the royal household

Beautifully proportioned, the great hall is presently the family living room used by Lord Ralph Kerr and his family. At an earlier period this area would have been divided by a moveable panel creating a smaller area used as a private sitting room by the laird,  opening out when necessary to a larger space suitable for entertaining and celebrations or dealing with the duties of rent collection and justiciary days.  A grand fireplace in 17th century design was uncovered during the 19th century and a smaller,  identical hearth can be seen on the south wall . Note the decoration on these fireplaces is in a similar style to the stonework surrounding the main tower door. Windows on the north and south walls provide daylight and a spiral staircase connects the hall with the upstairs floors, interconnecting with the stair in the tower.

The Portraits & Their Stories

Ancestors and characters well known in Scottish history peer down from the walls.  To  the left of the main door from the tower is a fine portrait of  Sir Thomas Kerr (1529-1586) while on the right of the doorway is his second wife Janet Scott, both painted by Adam de Colonne. The story of Sir Thomas can be read elsewhere in the book, Janet Scott was his second wife and the sister of Sir Walter Scott of Buccleauch, a family who had a long standing feud with the Kerrs,  Mary Queen of Scots had shown her concern for this feud between two powerful families in the Borders and had urged a union between the two names to ease the tensions, Sir Thomas Kerr may well have complied, being a staunch supporter of Mary during her reign and throughout her long imprisonment in England.

Above the door the Lothian connection is represented by Anne Kerr the 3rd countess of Lothian and only issue of  Robert Kerr 2nd Earl of Lothian.  In 1630 she married William Kerr (1605-1675) the  son of Robert Kerr, 1st Earl of Ancrum.  A portrait of William can be seen on the east wall, known as the ‘Red Boy’, and painted by Gilbert Jackson. William became 3rd Earl of Lothian in his own right, he was a well educated man and a famous Covenanter and fought on the opposite side to his Father during the Civil War. Despite their opposing loyalties they remained on good terms throughout and a collection of letters written during the conflict is contained in a printed volume known as ‘The Lothian Ancrum Correspondence’.

On the west wall is a portrait of Robert Carr 1st Earl of Somerset (1586-1645),  he was the youngest son of Sir Thomas Kerr and Janet Scott, born in 1586 after his Father had died in captivity in Aberdeen in February of the same year.  He was married to a famous court beauty, Francis Howard and together they were accused, condemned and reprieved for the murder, by poisoning, of Sir Thomas Oversbury,  a poet at the court of  James VI.  Sir Robert Carr was for a time the King’s ‘favourite’ and the outcome of the final judgement caused a sensation prompting many to accuse the King of favouring the Scottish nobles.

Above the mantelpiece is a fine painting by Jacobus Schooneman showing John Kerr de Jure 3rd Lord Jedburgh (d.1669) and his wife , he was the last direct descendant of the original Kerrs of Ferniehirst, successfully establishing his claim to the Ferniehirst estates in 1654. De jure is a legal term that means ‘by (the) fact’ and may well have been a nickname given to his Father Alexander (d.1650) who relinquished the name Kirkaldy claiming the estates at Ferniehirst as the nephew of Sir Andrew Kerr who died without male issue in 1631. JohnKerr de jure also died without issue, and was succeeded by his kinsman William, 2nd Marquis of Lothian.  It is to be noted John Kerr de Jure did not assume the title Lord Jedburgh.

To the right hand side of the staircase door is James Douglas, Earl of Morton (1520 -1581), the 3rd Regent of Scotland during the minority of James VI. He was strictly an enemy of the Kerr family and particularly disliked Sir Thomas Kerr for his support of Mary Queen of Scots.  Earl Morton introduced an early guillotine from Halifax known as ‘The Maiden’ and used it to his own satisfaction to rid himself of his enemies and rivals, but poetic justice had its day and he found himself the victim of his own greed for power and lost his head to his own machine.

Beside the Morton portrait a large painting by Van Dyckshows two of the eight sons of Frederick V of Bohemia and his wife Elizabeth, known as the Winter Queen, Rupert can be seen on the right of the picture and his older brother Charles Louis on the left.   Elizabeth was the daughter of James VI/I

The painting to the right of the 2 princes is a portrat of Edward Clinton, the commander of the English fleet. during the invasion of Scotland by Edward Seymour, Lord Hertford.Clinton provided naval artillery support at the Battle of Pinkie near Musselburgh on 15th of September 1547, influencing the outcome of the battle  with a barrage of cannon fire from seaward. driving the Scotttish troops into  the arms of the English who proceeded to slaughter  almost 15000  Scots.

Above the small  fireplace Robert Kerr of Ancrum (1578-1654) looks out over the hall. This fine, educated man descended from a third son of Sir Andrew ‘Dand’ Kerr (1480 -1545).   Robert Kerr was forced into exile following the civil war.  Never to return to Scotland he died in poverty in Amsterdam.  Recognised as a fine poet and a great friend of John Donne, Sir Robert is attributed with introducing the work of Rembrandt to Britain and was himself a patron of the arts.  A brave and capable man he was favoured by James I, who appointed him to responsible positions at court and by Charles 1st who conferred the title Earl of Ancrum on him in 1633.

On the east wall can be seen this magnificent portrait of James 1 painted by Daniel Mytens in 1621 showing the king in his full regalia while his face conveys all the pain of his unhappy early life and the burdens of his office as King of a new United Kingdom. Although the frame describes the King as James VI he is in fact 55 years old at the time the portrait was painted and had ruled as James 1 for 18 years. The relationship with the Kerrs of Ferniehirst began when James was an infant, Sir Thomas Kerr was a undying supporter of his Mother Mary Queen of Scots and played a major role in the lang siege at Edinburgh Castle when he was in opposition to the ‘King’s Party’.  All was eventually forgiven and members of the Ferniehirst Kerrs were to play important roles at the court of James V1 of Scotland and at the English court after the 'Union of the Crowns' in 1603. 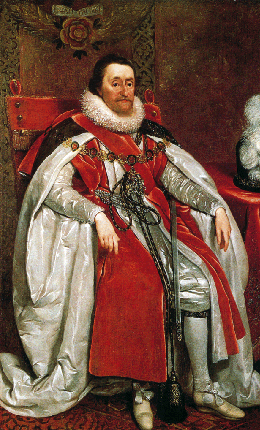 A door to the right of the small fireplace leads through a book lined passageway  formed during the Victorian conversions from the west side of the 17th century Laird’s bedroom. The passage leads  to a beautiful wood panelled tower room once the most private of the grand apartments, the Laird’s study.  Only family members and important visitors would be admitted here.  Three windows  allow  a surprising amount of light into the room.  The most striking feature is the 17th century oak ceiling of rare design faithfully restored during the 1980s restorations. In 1986 the walls were relined  and the shelving replaced, remaining faithful to the original 17th century design. 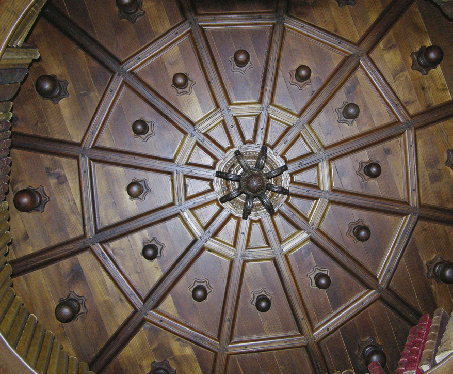 The 17th century oak ceiling in the turret library

The library makes a delightful conclusion to the castle tour before briefly passing through the castle kitchen to emerge at the top of a simple stone staircase blending so completely into the castle courtyard many visitors imagine it to have been an architectural feature as old as the castle itself.  The stair,  constructed in the 1980s,  replaces a wooden staircase to the double doors formed from a window area to allow access to the youth hostel during the 1930s.  On either side of the doorway can be seen the monograms of the 12th Lord and Lady Lothan while the lamps and other decorative features were inspired by details from the castle architecture.