The oldest son of Dand Kerr and Janet Hume,  John Kerr lived through the reigns of the ill fated James IV,  James V and the regency of Mary of Guise 1554 -1560,  until her death and the return to Scotland in 1561 of Mary Queen of Scots.

John married  Katherine Kerr, the daughter of his kinsman Andrew Kerr of Cessford and inherited the castle of Ferniehirst and the lands and titles of  his father in 1545.  Much is mooted about the feud between the Kerrs of Ferniehirst and the Kerrs of Cessford but during their long history they co-existed peacefully for the most part, occasionally finding themselves supporting the opposing side, and the mercenary nature of the two branches of Kerrs would on occasion result in the support of the opposing army on the battlefield.

In 1546 the English returned to the Borderland, pillaging and burning towns and villages, castles and peles in their campaign, now referred to as ‘The Rough Wooing’.  Ferniehirst was occupied and held until 1548 when a successful and bloody seige returned the castle to the Kerrs.   A first hand account of the re-taking by French and Scottish forces describes the manner of the siege and the dreadful revenge meted out on the English when they surrendered.  It was written by the commanding officer of the French battalion in his despatches to General d’Esse who led a campaign to relieve key positions held by the English. Below is an edited version of the account.

In recognition of  his contribution to repelling the English forces from the Scottish borders,  Read also the poem 'The Reprisal' by Walter Laidlaw.  John Kerr was knighted by the Regent Arran in 1548 and appointed Warden of the Middle Marches.

Sir John Kerr died at Ferniehirst Castle in 1562 leaving two sons, Thomas and Andrew. Mary Queen of Scots had landed at Leith one year before and Thomas Kerr the oldest son would bring the danger and the romance  of these climactic years into the heart of Ferniehirst Castle. 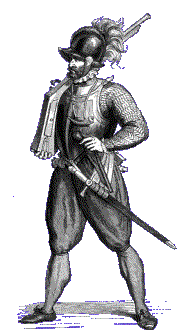 These gunners formed a great part of the French troops sent to relieve some of the key Scottish positions held by the forces of Henry VIII of England. The arquebus was an early form of rifle and had to be supported on a stand to steady the weapon before firing

The castle was garrisoned by sixty to eighty Englishmen, under a commander of singularly cruel and lascivious character. As the French captains, with some 200 harquebusiers, advanced to the assault, they were met by about five-and-twenty of the garrison, who had taken up a strong position to defend the approach to the castle. They were, however, driven back, first into the wood and then into the base-court of the fortress, ten of them falling dead or badly wounded by the way. The French gained the enclosure wall, driving the English to seek refuge in the keep, which was then surrounded, so that “none of those within durst show his nose.” Protecting themselves by means of “ tables “ from missiles thrown from above, the assailants then succesfully undermined the tower. The English captain emerged through the aperture, and proposed to surrender on condition that his own life and those of his men were spared. Being answered briefly that “slaves have no power to treat with their masters,” he returned within the tower. A company of Borderers now arrived and forced their way into the base-court. This served to increase the trepidation of the garrison, who knew that they had every reason to fear the Borderers’ vengeance, so that the captain, quickly reappearing at the breach, was now for yielding himself unconditionally to two of the French officers. A Borderer who recognised in the Englishman the ravisher of his wife and daughters, with one sword-blow severed the villain’s neck. The act was greeted with acclamation by the Scots, who, after bathing their hands in the blood bore off the head and set it on a stone cross at the parting of three roads, that all who passed might look upon it”. De Beaugue adds some ghastly details of their treatment of prisoners, telling us that they would indulge in trials of skill in dismembering them, and when their own supply of captives was exhausted, would purchase those of the French expressly to torture them, parting even with their weapons for this purpose. De Beaugue maintains that the English had brought it upon themselves by their tyranny and cruelties. - July 1548 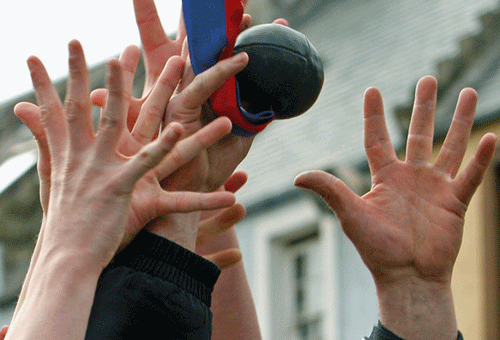 The throwing about of the severed heads of the English prisoners is celebrated in Jedburgh in March with the Handba’ game played in the Jedburgh streets. A rough and ready match is played with a leather ball with ribbons attached to represent the hair of the vanquished Englishmen.