The farm steading of Altonburn, also known as Attonburn, east of Morebattle stands on the site of landholdings first granted to John Ker of Selkirk Forest in 1357. John Ker founded the dynasty of the Kers of Cessford and later c. 1470 the Ferniehirst Kers.

Peel, a member of the Berwickshire Naturalists Club describes Attonburn in 1910.

'Occupying gentle ground on the river terrace on the N of the Atton Burn opposite the present farm steading of Attonburn and at the base of Percy Law, there are the remains of the medieval village or Auld Toun. The remains are very slight and appears to comprise a series of three long rectangular, N to S oriented, structures set side by side. Four hollows have been created along the S edge of the three structures although there full extent has been lost by erosion of the terrace edge. Attonburn was the ancient home of the Kers which was in their possession since 1357 (BNC1910).'

For directions by road a map can be accessed at Canmore mapping : 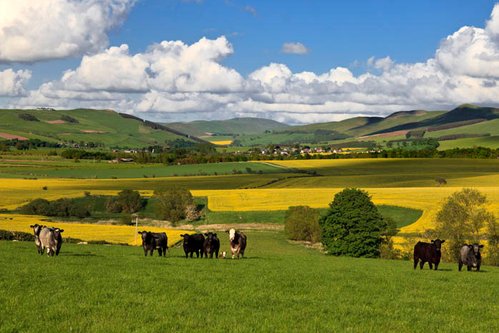 The Cheviot Hills near Altonburn