The castle is unsafe to enter

A number of information boards describe the structure 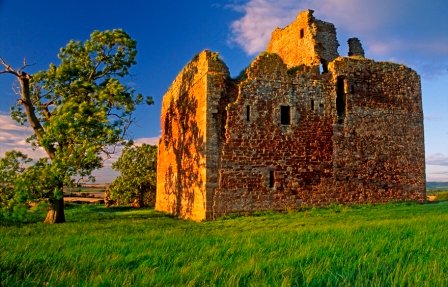 Cessford Castle was first built by Andrew Ker c.1450. Andrew was the Father of Sir Thomas Ker of Smailholm who first built Ferniehirst c.1470. Regarded by Lord Surrey as one of three strongest castles in Scotland his attempts to take Cessford  in 1523 failed to breach the curtain wall and the castle was only gained after Sir Andrew Ker of Cessford surrendered to the Earl of Surrey who reported  "It might never have been taken had the assailed been able to go on defending".  A visit to Cessford reveals the strength of the Ker family as it grew in power. Before Sir Andrew Ker first built the castle and styled himself  'of Cessford', Previous   Ker Chieftains were known as 'of Altonburn', the lands first granted by John de Copeland in 1357 to Sir John Ker of Selkirk Forest; the next stop on the journey back in time to the roots of the Roxburghshire Kers. Off the beaten track and set in the stunning scenery of the Cheviot Hills, Cessford is well worth the journey. 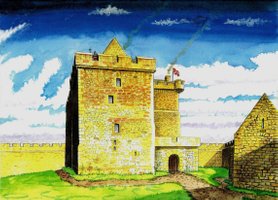 It is important to observe all warning signs. Don't take any unnecessary risks